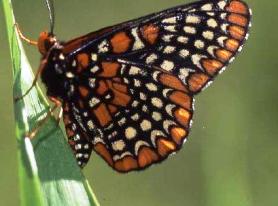 We are honored to be able to report that on June 9th the 11th known Baltimore Checkerspot (Euphydryas phaeton) colony in the state of Maryland was spotted by Pat Durkin at Red Wiggler.

When this orange-and-black checkered butterfly was named the official Maryland State insect in 1973, the species was common throughout the region within its wet meadow habitat. In 1980 there were 14 Maryland counties with 30–plus known colonies – By 2005 the population had dwindled to only nine colonies in five counties. Researchers had believed the butterfly disappeared from Montgomery County years ago. Over the past year, our site and another only one mile from our gardens have been identified. – Now with 11 colonies, there is budding hope that the Baltimore Checkerspot will find what it needs to survive. It needs one specific host plant to feed on, the White Turtlehead (Chelone glabra) which is found in open wetlands and along the banks of slow moving streams.
The Washinton Post reported the sighting on June 13, see the article.

This week we are harvesting:

In the pick your own there will be a limited amount of basil for the first time this season! -Woody