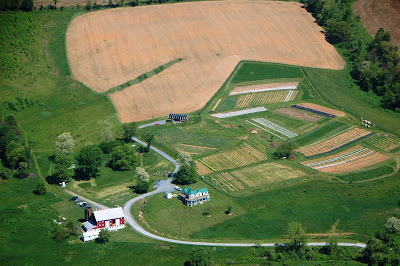 Red Wiggler Community Farm remembers Hallie Ausmus Wells birthday today August 1, 1893- she would be 125. Below is a re-posting of an archived blog entry describing how she came to donate her 290-acre farm to the Park system in 1981- we are very grateful for this special woman and her contribution to our community.
Originally posted: Friday, August 15, 2008, by Susan Skeith, valued Red Wiggler Volunteer 2008

They had no children, and this fact led, in 1956, to Ovid Hazen Wells and Hallie Ausmus Wells making a momentous decision which affects us all today.

They clearly loved the State of Maryland, the open landscapes of Montgomery County and the charm of farming life. They both seemed to be visionaries of their time desiring to protect the land that they valued so dearly. In 1956 they made their decision to deed the 290 acres of farmland which they owned to the Maryland-National Capital Park and Planning Commission so that it might remain as open space and be used for recreation. In l981, when Hallie officially made the donation, their vision had become reality.

Ovid Hazen Wells was born in Claiborne County, Tennessee in 1894, as was Hallie, in1893. They moved to the District of Columbia in 1918 when they were in their twenties. Ovid worked on the White House Police Force (now known as the Secret Service) and Hallie worked first for War Risk Insurance (a Federal department for WW1 veterans) and later for the IRS.

In 1940, Ovid retired and the Wellses bought 94 acres on Skylark Road in Clarksburg and later they acquired more adjoining land, including a dairy farm, bringing their total acreage to 290. They continued to live in DC but Ovid worked on the farm with the help of farmhands. Hallie described her husband as a ‘handshaker’, one who was prone to bringing people over on Saturdays and Sundays to show off his farm. She once told the Gazette in a 1989 interview that “my husband informed me, one day back in 1952, that he planned to move to Cedar Grove and if I didn’t want to come, he would leave me a bed!” She promptly retired and they moved to the farm permanently.

It was on a Spring morning, four years later, when they had their discussion about who should benefit from their good fortune when they were gone. Between them they had more than 20 brothers and sisters and, as Hallie so eloquently put it, “bequeathing it to all those heirs would have meant a nickel piece of it each time lawyers and everybody got their part”. Besides, the Wellses were more than a little concerned that development was intruding ever closer and they wanted to make sure that their piece of open space was left for the community to learn about their agricultural heritage and to have a recreational park for generations to come; not merely development into houses on one-acre lots.

They also wanted it to benefit children.

Later that same year, Ovid sadly died at the age of 62, having been denied his senior years working the land as he had hoped. One wonders if he knew his life was coming to an end and he needed to have a plan for Hallie.

Hallie made the donation of their farm in 1981, despite the fact that the land had appreciated in value to over 1 million dollars. She continued to live there until her death, at the ripe-old age of 98 and she is buried with her husband in the Salem United Methodist Cemetery on Ridge Road.
Because of the generosity and astounding vision that this couple exuded we are still able to work the farm, as Red Wiggler; providing job opportunities for adults with developmental disabilities; growing and selling high-quality produce and continuing to expand the Community Supported Agriculture (CSA) program which, by its nature, creates and nurtures a healthy and inclusive community.

What a superb legacy Ovid and Hallie have left for this community and, like them, we must continue to protect and preserve the land around us as our responsibility for this generation and generations to come.