Before starting work at Red Wiggler, there were a lot of vegetables I was familiar with, though never actually ate, much less cooked. Recently, I’ve started to experiment a little more with the vegetables I was given, even if it meant cooking the same way—sautéing—each time.  Even now, after working at the farm seven years, there are still some vegetables I don’t cook too much, being that, I prefer to eat them raw. 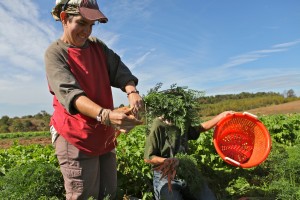 Last summer, I had some small zucchini that I didn’t know what to do with. A good friend of mine suggested I cut the zucchini in rounds, or chunks, depending how big the zucchini was, then cut up some onion. The tomatoes were the last thing I added since I just wanted to heat them a little.  Each time I cooked this, I used the green zucchini or Spineless Perfection variety. Maybe the next time I cook it, I might use the other variety of zucchini, Costata Romanesco, to see if I can tell a difference between the two. One of the times I prepared this, I tried to add a bit more color by putting in some yellow and purple bell peppers. 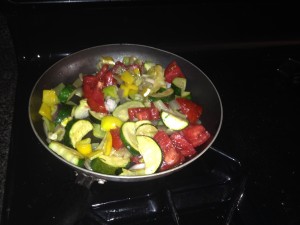 Usually when I get the Mizuna or Mibuna Asian greens,  I give them to my Mom, to use in her salad. Recently, I’ve attempted to cook something with them,  sautéing with a little olive oil and onion, garlic, and other vegetables. I made something that turned out really good with the Mibuna, which I was proud of myself for, because I hadn’t cooked anything with it before.

Though we don’t grow corn, there is usually extra that doesn’t sell at the August Leisure World market that the growers get to take home.  I’ve cut it off the cob and cooked it with a bit of garlic, purple bell pepper, Islander variety, and zucchini. After all that was cooked, I cut up some tomatoes and just mixed it up a little.

Generally, when I get kohlrabi, I eat it raw. On occasion, I sauté it with bell pepper and onion. It’s not as easy to peel as some other vegetables, so I cook it until it is soft though still a bit crunchy.

Turnips are another thing I eat raw. I cooked them once which didn’t turn out too well, so since then I prefer to eat them raw. There was one time when I looked up a beet recipe—thinking what I had at home WERE beets, then realized they were turnips! 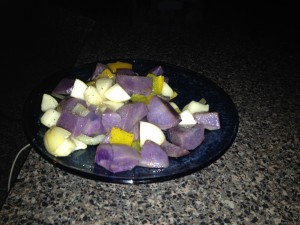 Eggplant is another thing I experimentally cook with. One time I prepared it, I didn’t like the way it turned out. I’m not sure if I cooked them too much or if I just wasn’t consistent in size when I was cutting them up before cooking. This season, with some of the newer varieties Kermit and Calliope, I’ve tried cooking it again and it surprisingly turned out pretty good.