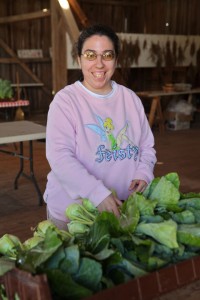 Kimberly started working at Red Wiggler as a Grower in Training in 2010 and was hired as a Grower in 2011. She has worked in the fields picking onions, tomatoes and potatoes, weeding beds of crops, and worked at the wash station cleaning vegetables. This year, Kimberly started a new position working at the CSA pick up. At the CSA pick up, Kim cleans the barn to get it ready, puts the food out in the baskets for CSA customers and says hello to the customers. Her favorite thing to do at Red Wiggler is putting the food out for the CSA pickup. Kim likes to work at Red Wiggler because it is a paying job and she enjoys working with her friends. When she is not a Red Wiggler, Kim works at 2 different nature centers feeding the animals. She also likes to shop at thrift stores. Kim is a hard worker and enjoys working at Red Wiggler. 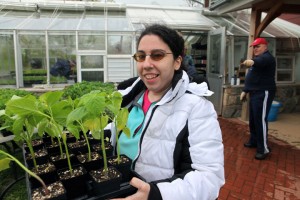