On Tuesday, one of our awesome CSA member/volunteers, Sebastian, came out to volunteer at the farm, as he often does with his mom and brother. He has been generous enough to share his day with us through his words and photographs, and we are very excited to have him as a guest blogger.

~~~~~
It was a cool morning, and it was somewhat loud with the crickets chirping, as we (my mother, my brother, and I) went out to pick swiss chard. It’s not as easy as you might think. The leaves can’t have holes, and they should be somewhat big. But all in all, it was fun.

I took a little rest and looked up. I saw a bunch (at least 15) of big birds flying around in a circle. It was so cool! And then we moved on to the golden beans. I tried one of them – it was very good. The thing is, a few of them were blackish, so I didn’t pick those, just in case you’re scrunching up your face right now. 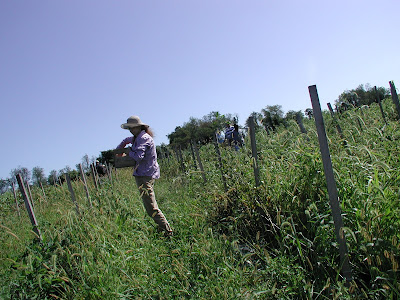 Next we had lunch. We had to wash our hands first, then we ate in the barn. My mom had packed lunch for us. We pulled a bunch of tables together and sat there and talked with the growers. All in all it was pretty fun.

And finally – THE CARROTS. We had to loosen them with the pitchfork first, then pull them out. It was pretty hard, and slow. But, eventually, we did them all. I had to carry this heavy basket with Andrea. I couldn’t do it all the way. Adrienne had to help. Then one of the growers had to rinse the carrots. First we took the tops off and laid the carrots down on one of the tables outside the barn. And then he rinsed them, spraying them off with a hose. 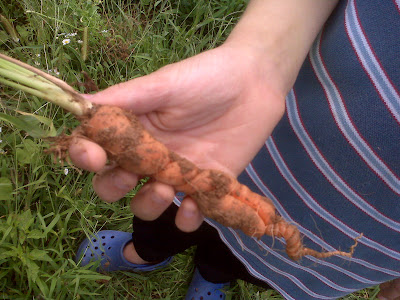 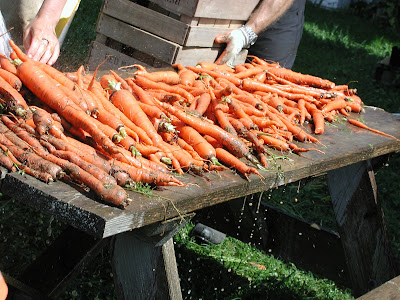 Then we left, our day was done.