Today our big goal was to plant the 250 pounds of potatoes that we have in the barn. The weather turned out to have other plans for us, but we did manage to take a step in the right direction. This morning we used the tractor to create some small hills, and used some serious man power to lay landscape fabric down over three rows of those hills.

This year we’re trying a new method for our potatoes. Instead of “hilling,” which is the more traditional way of cultivating potatoes, we’re planting them under landscape fabric on some tiny hills that we won’t maintain as the season goes on. “Hilling” normally entails creating a small hill of dirt around the potato plant’s stem as it grows to cover the tubers, improve drainage, and to give the potatoes soft dirt that they can grow through easily to become big and beautiful. The hope is that the landscape fabric will accomplish some of those same functions as the hilling, namely shielding the potatoes from the sun so they don’t turn green and become inedible, and giving them plenty of space under the surface of the fabric to grow easily–all without us having to dig up the potatoes at the end of the season!

Our plan was to lay down the fabric and then burn a small hole that we could plant through every 12 inches. However, today turned out to be very windy–not to mention snowy! We thought at a few points that we might all sail away rolling out this 300 ft-long sheet of fabric, but though we managed to get it down, the wind kept putting out our flame for making the holes. So it looks like we’ll be planting them tomorrow. Keep your fingers crossed that it’s not too windy and that it doesn’t freeze tonight. We tucked the potatoes in in the barn, so hopefully they’ll be a-ok for their big day.

Here’s a photo of one of the four varieties of potatoes that we’re planting this year. We’ve chopped the potatoes up into halves and thirds before planting. 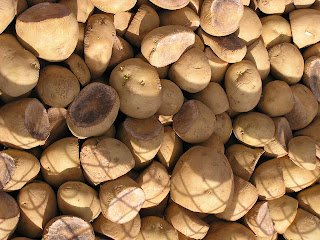 And here are some of our staff and growers with the trailer full of potatoes. Look at those clouds in the distance! There’s our snow! 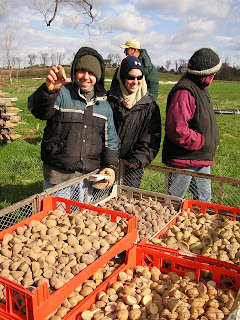 Here are the beds after we finished putting down the landscape fabric. You can see the three little ridges or hills where we’ll plant the potatoes tomorrow, and where we succeeded in burning a few holes into the fabric. The wind was whipping it up so much that we decided to weigh it down with these tomato stakes. 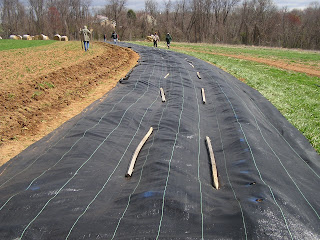 And on a completely different note: here’s the Kohlrabi, of previous posts’ fame, hardening off in the barn before planting. We put the seedlings under grow lights and a blanket to try to keep them relatively warm in the cold barn. Pretty cute! 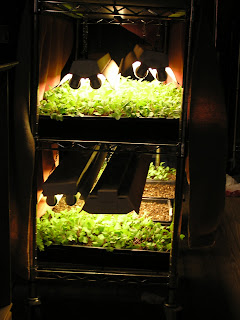