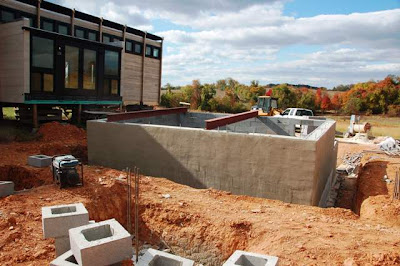 The block foundation walls went up this week. Special thanks to Whitney, Baily, Cox and Magnani engineers Dick Magnani and Rob Murray for designing the foundation pro-bono and providing on site support during construction this week. Rob was the 2005 Solar House Project Manager. He and the others on the 05 UMD Solar House team have shown exemplary follow through with this project. Mr. Dick Magnani has been a great mentor to the Solar House team and to us at Red Wiggler. We can’t thank these people enough.